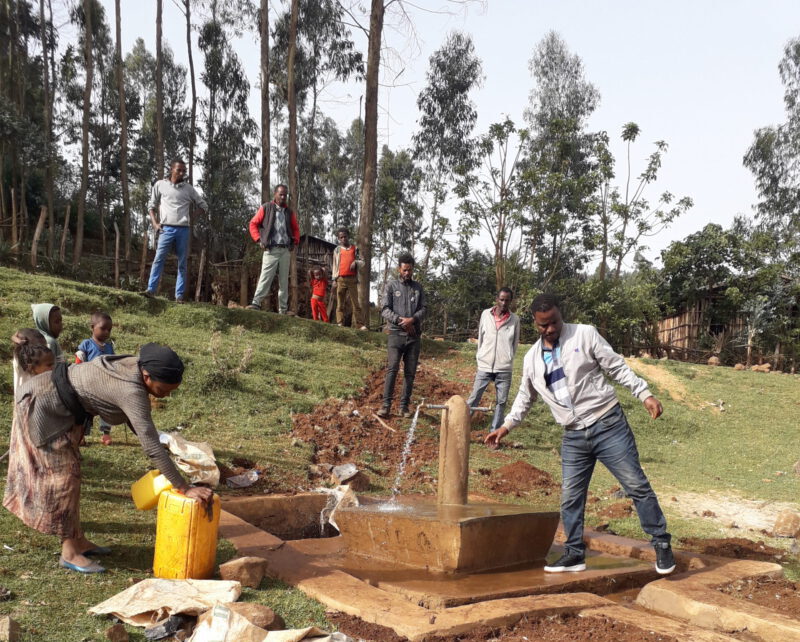 At the end of July, the Henner Lang Memorial Project I was completed after four months of construction. Now about 900 people have direct access to clean water – about 400 of them are under 15 years old.

In addition to the masonry spring catchment, a water tank, a large washstand and a water point, a water trough for 1500 farm animals (cows, sheep and donkeys) was also built.

The project in the region, located 185 km west of Addis Ababa, was financed by funds donated in memory of our founder and founder Henner Lang, who passed away in 2021.

As part of the project, the existing water access, which is used by animals and people alike, was provided with a brick spring capture to protect the access from contamination and to be able to direct the water in the desired direction without losses. Starting from the captured spring, a total of 900 m of pipelines were laid to carry the water to a tank and from there to a water intake point. This is located in close proximity to the community, which shortens the distances needed to fetch water. In addition, a washstand was constructed, eliminating the need to transport large amounts of water to wash clothes. Since most families rely on keeping livestock, a separate water trough was also built for the livestock, which is also connected to the water supply.

In addition to these structural measures, a water committee consisting of three women and four men was established at the start of the project. The committee coordinates the active participation of the village community, whose members have taken on the manual work, such as excavating the earth, themselves. The committee will continue to ensure the sustainable and responsible use of the water supply in the future. The establishment of the water committee and the active participation of the community ensure not least a strong identification with the project and its results in Ambacho.

More info on the project at: