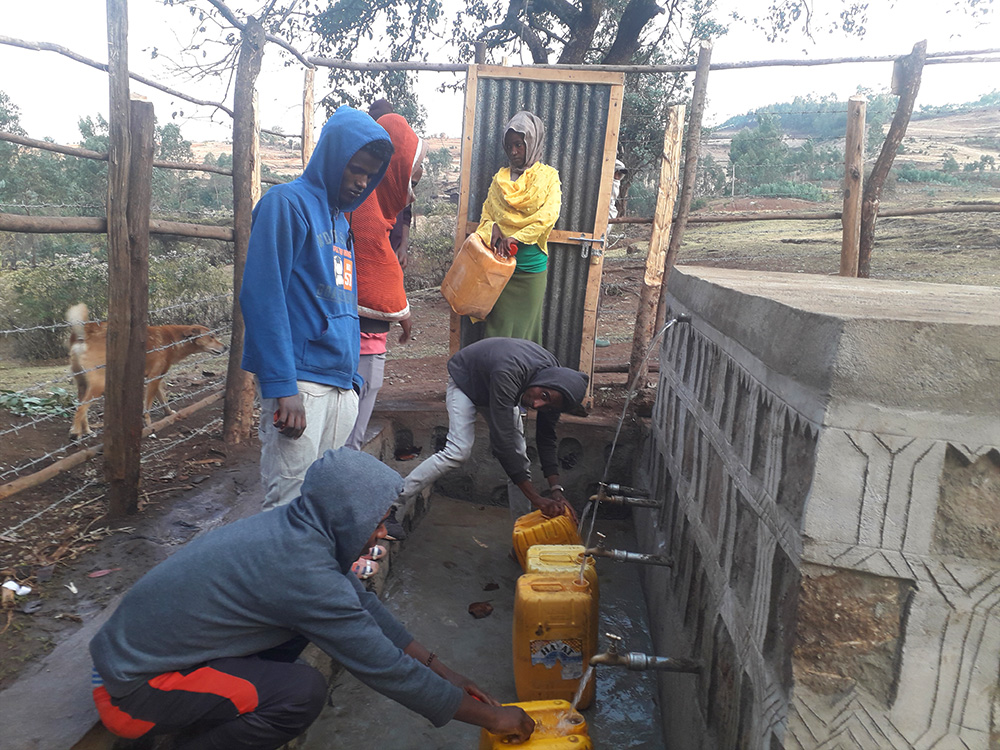 In March 2021, the lives of many people in Ethiopia’s Oromia region improved significantly. Until then, people living near the Gafarssa spring had no clean water for drinking, cooking, washing dishes and washing hands. The inhabitants had to transport the water over long distances or use the polluted water. Drinking water for farm animals also had to be brought from far away places, which was not only an enormous physical burden but also a time-consuming work, especially for women and children. The lack of clean water was a cause of waterborne diseases, which increased the rate of illness, especially among pregnant women and young children.

Early involvement of the local population

The project began with the formation of a water committee that worked to mobilize local resources and engage residents during project implementation, ensuring clear communication between the community and WaterFoundation’s implementing local project partner. The water committee has seven members – five men and two women.

The spring was then enclosed with a small masonry structure and closed off at the top. The water is stored in a 4 m3 tank, which also serves as a water tapping point. The tank was fenced off by the residents to protect the area from animals and to be sure that all persons collecting water paid the user fees. All simple work was done by community members as part of their commitment to the project.

A large sink was constructed near the tank where clothes and materials can be washed by the community. A separate washing facility for these purposes reduces water transport and also prevents contamination at the water tapping point. After construction in February 2021, there was a one-month testing period to ensure all components were functioning properly.

District office to be involved in training

At the end of the trial month, a final training session was held with the water committee to familiarize them with technical management, financial management, and water sanitation. The district office representatives were included in the training activities to build the relationship between them and the water committee members. The District Office of Water, Minerals and Energy is responsible for hiring technicians to perform repairs when needed, and they also assume an advisory role on financial or maintenance issues. 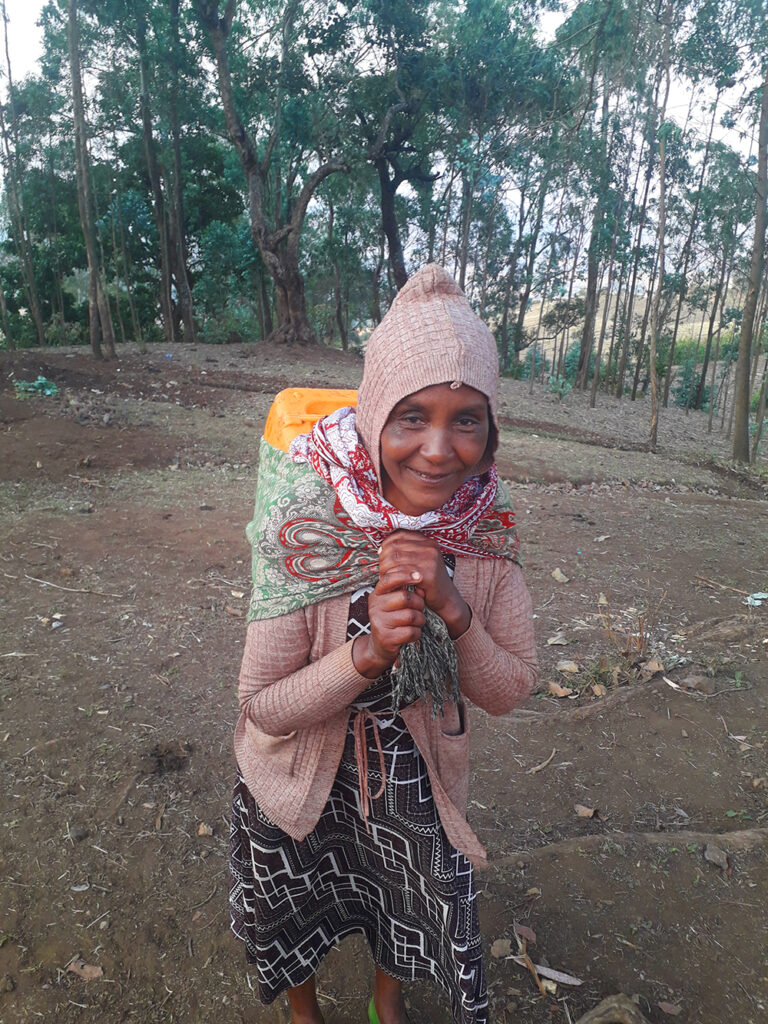 “I really wanted to have clean water near my house. I am not educated and I don’t know how to say it. But I prepared food for the construction workers several times just to show my desire for clean water. Now I have the water and I am happy.”

Expanded circle of users: 1,800 instead of 270 people currently benefit from the project

Originally, the 6,600 euro project was to benefit 45 families or 270 people. However, due to unexpected circumstances, the number of beneficiaries is much higher, at least in the short term.

Godda Walliyye is located 2.5 kilometers from the district town of Gedo, which commissioned a new water supply system two years ago. Unfortunately, this major project was only in operation for a few months, so there was not enough water to meet the needs of the population. As a result, many residents in the western part of the city have gained access to the new Godda Walliyye water point, which is a more reliable source than the Gedo city water supply. Although these people were not scheduled as permanent beneficiaries, they will likely continue to use the Godda Walliyye source until repairs are made to the city water system. People from Gedo carry the water on their backs, on horse-drawn carts or donkeys, and some businesses come in trucks to buy water from the spring.

Due to the increased demand, the opening hours of the water point have been extended. The water committee has decided to employ a person to monitor the spring and water sales 12 hours a day to ensure that water user fees are paid properly and that all infrastructure is treated with care.

Because some of the people who transport water by horse-drawn cart or truck serve multiple people, it is difficult to calculate an accurate number of beneficiaries at this time. The supervisor asks them how many people they transport water for in order to make a calculation. Currently, there are an estimated 1,800 beneficiaries.

It has not been necessary to restrict the number of users because the spring has sufficient water. About 60,000 liters per day could supply up to 3,000 people in a rural area. In this respect, the project has made it possible to provide an important service to a much larger group than originally planned. Despite the increased number of users, the water is sufficient to allow regular irrigation of the fields, which will lead to higher crop yields. This is expected to bring additional income and food security to the families.

Sustainability is a top priority

Sustainability is a central theme in all WaterFoundation projects, which is ensured through a number of measures. First, meetings with residents before the project began ensured that people understood that the project “belonged” to them and that they needed to take care of it during and after construction. Another important measure was the active participation of local people in project implementation. This included unskilled labor as well as training and selection of water committee members. When local people feel engaged and involved, it strengthens their sense of ownership of the project. The water committee received training and support to enable them to oversee the new infrastructure and its maintenance. Finally, water user fees were set in consultation with city officials to ensure that they are affordable while still providing a regular sum of money that can be set aside to cover any repair or maintenance costs needed in the future.

Proven cooperation partner with a wealth of experience

The implementing partner on site was the Environmentalists Development Association – Ethiopia (EDA-E), which was founded in 2006 by committed Ethiopians. Since then, WasserStiftung has been successfully working with EDA-E to implement water and sanitation projects in Ethiopia.