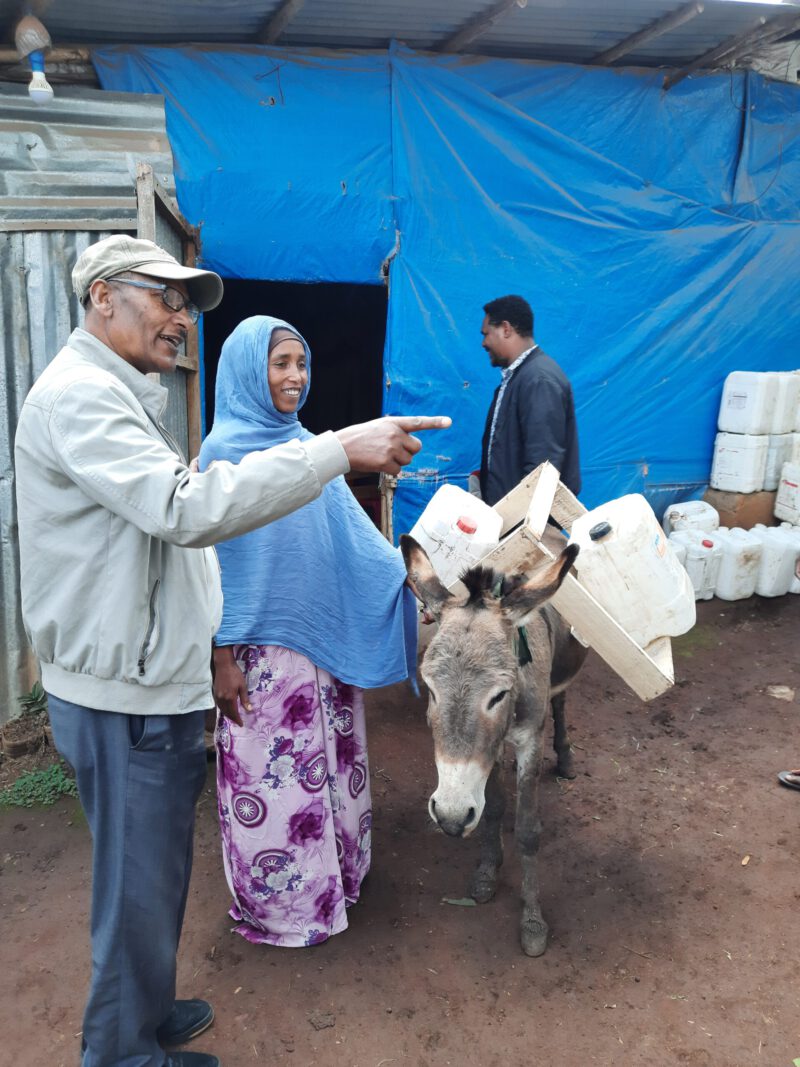 In 2022, the WaterFoundation was again able to hand over 50 donkeys to needy families with the support of the Ethiopia Gospel Deliverence Church (EGDC). The women, who are traditionally responsible for transporting water, are particularly happy about the WaterFoundation’s campaign.

One of the recipients explains why: “As a young woman, I am responsible for carrying water home on my shoulders at least twice a day from the water point 2 km away – time I would otherwise spend at school. With the donkey, I carry as much water in one walk as I would on four trips on my back. I have named the donkey “Relief”. Thank you to the people who donated for me without knowing me.”

Pastor Demeke, along with his supporters, made sure that a total of 50 donkeys were purchased, outfitted and delivered to their new owners in June. The distributions took place in three different locations southwest of the capital Addis Ababa: in Asela, Kersa Siba and Jima.

Thanks to his network, Pastor Demeke was able to set up a project committee at each location, which was entrusted with the actual implementation. Because of their local knowledge, the committees were able to purchase the donkeys at local markets. In addition to the animals themselves, the local teams procured the necessary equipment to enable the donkeys to be used as water carriers. The donkey equipment consists of a carrying frame and two water canisters. The total cost for a donkey including a carrying frame and two plastic canisters is around 150 euros.

The selection of the project beneficiaries was made with the help of the leaders of the local church community, as they are most familiar with the local conditions and needs. The selected women then nominated Muslim or Orthodox women from their environment to ensure that other population or religious groups also benefit from the distribution.

To minimize risk due to the current tense security situation in Ethiopia, the distributions took place on the properties of the church, which is considered neutral in the conflict and whose integrity is respected. Prior to the handover, the women were instructed on how to handle the animals.

The recipients were also encouraged to support other women in their community so that the donkeys would also benefit other families. After appropriate documentation, the animals were officially handed over to their happy new owners.