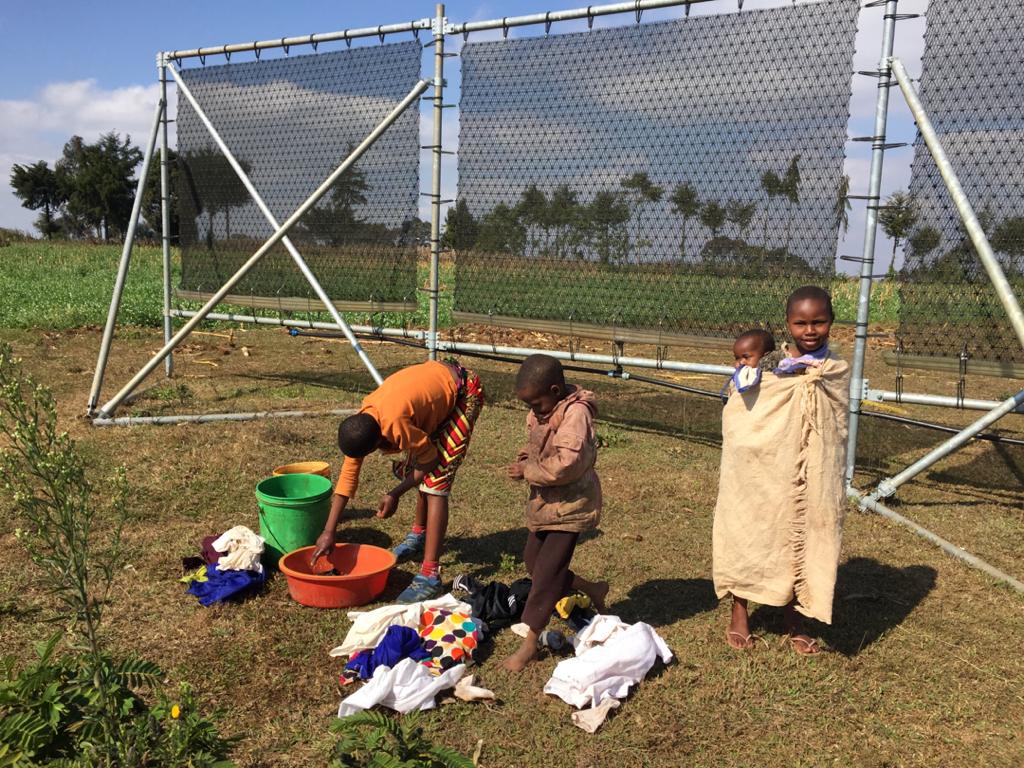 Nature serves as a model for this technology for obtaining drinking water. Plants and animals show how it works: a 30-metre-high Canary Island pine tree at the altitudes of La Palma or Hierro can “comb out” about 50 litres per day from the fog with its long needles thanks to the trade winds. The dune grass in the Namib Desert manages 4 litres per foggy night. This is also where the 2 cm tall fog drinker beetle lives. It stands against the fog clouds with its head down. When the condensing water drops on the slanted body have reached a size of about 5 mm, the water runs down the grooves on the beetle’s back to its mouthparts. The amount of water absorbed corresponds to about 40 % of its body weight.

Using the fog robustly and delicately

After many years of research and testing, the WaterFoundation has developed the so-called CloudFisher, an effective and durable fog collector to convert moisture from the air into clean drinking water in areas with high fog density. It is the first fog collector that can withstand high wind speeds of up to 120 km/h. It is quick and easy to install, requires no energy and is extremely low-maintenance. All materials used are food-safe. Thanks to its performance, the CloudFisher guarantees countless people high-quality drinking water that meets WHO standards at low cost.

Thanks to its performance, the CloudFisher guarantees high-quality drinking water that meets WHO standards at low cost for countless people. The extracted water can also be used in agriculture and for livestock breeding, reforestation projects and commercial purposes.

Where can the “fog catchers” be installed?

How do fog nets work?

The wind pushes the fog through the vertical net. The smallest droplets stick to the special fabric and unite to form large drops. These run down into the collection channel due to gravity. From there, the fog water flows through pipes into a reservoir.

How productive are the CloudFisher fog collectors?

Depending on the region and season, the daily water yield is between 6 and 22 litres per square metre of net.

But also during monsoon seasons, which follow the fog season from November to June, e.g. in Eritrea, the meshes are used to collect water, supplemented by horizontally attached polyethylene sheets. Depending on its purity, the rainwater obtained can be used as drinking water or for agriculture and watering livestock.

Every fog project begins with meteorological data collection on wind speed and direction, relative humidity and temperature, precipitation and the amount of water collected. These findings are used to decide whether the location is worthwhile for producing water from fog and how the collectors will be optimally aligned with the wind.

Where are the WaterFoundation’s fog collectors already located?

Fog collectors in Eritrea:
In 2007, the first 20 fog networks were set up together with the project partner FogQuest. 10 collectors each in the villages of Nefasit and Arborobue, which are located at an altitude of over 2,000 metres.

CloudFisher Pro in Morocco:
The largest installation in the world has been in Morocco’s Antiatlas Mountains since 2018. With the fog nets, 22 litres are “harvested” per square metre on an annual average. With 31 CloudFishers (1586 sqm net area), that makes 37092 litres per fog day. This means that the 16 villages with approx. 13000 inhabitants have 12 litres of water per family member per day at their disposal.

More about the project: https://www.wasserstiftung.de/en/morocco-mount-boutmezguida/

Learn more about the project: https://www.wasserstiftung.de/en/tanzania-qameyu-umagi/

In the highlands of the Andes, preliminary work has been underway since 2020 to install a fog collector system with 14 CloudFisher collectors in the community of Alto Veladero for the local farming families, two schools and neighbouring settlements – a total of around 1000 people.